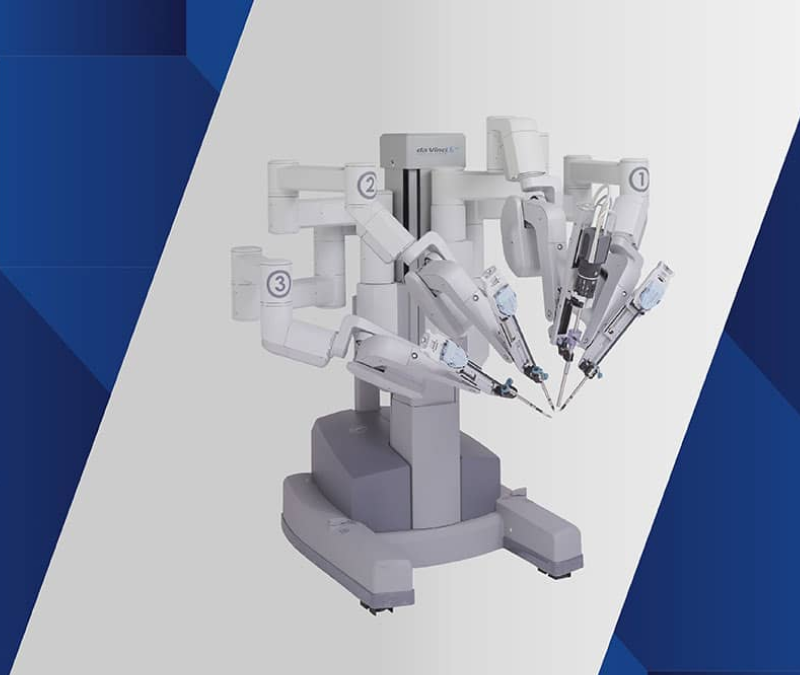 The term Robotic Surgery has patients visualising a futuristic operating room manned by complex looking robots programmed to undertake advanced operating procedures on humans, like seen in science fiction movies set in the future! But technology which is yet to perfect driverless cars is still far from developing robots who can replace human surgeons! What robotic surgery refers to is robot-assisted surgery which allows the surgeons to perform many types of complex procedures with more precision, flexibility and control than is possible with conventional techniques. Robotic surgery does not refer to an automated surgical system, but one remote controlled by a human surgeon. While the robots do not perform any surgeries on their own, they offer greater precision than handheld tools, particularly in hard-to-access parts of the body. At the core of robotic surgery is an experienced surgeon trained to use the robotic system for complex surgical procedures. The surgeon is in total control of the surgical system at all times.

The basic components of a robotic surgical system include a camera arm and mechanical arm with surgical instruments attached to them. The first use of a robot in surgery dates back to 1985 when a robot, the PUMA 560 was used to place a needle for a brain biopsy using CT guidance. This was followed by the use of robotics in the first laparoscopic surgery, a cholescystecotomy, in 1987 and the PROBOT used to perform prostatic surgery in 1988. Further developments occurred in the 90s till the introduction of the da Vinci Surgical System. The da Vinci Surgical System was approved for use in surgery by the US FDA in the year 2000 and was rapidly adopted in the US and Europe for use in various types of surgeries. Over the years technological advances and refinements have made the da Vinci Surgical System the latest in surgical and robotic technologies.

At Aster CMI, the robotic surgical system used is the da Vinci Surgical System. The da Vinci Surgical System was developed using telepresence robotic technology pioneered by NASA and the Scripps Research Institute. It was called da Vinci after Leonardo da Vinci, the 15th century inventor, painter, philosopher and Renaissance man who invented the first robot and used anatomical accuracy and three-dimensional details to bring his works to life.

With the da Vinci system is that that the surgeon can use tiny robotic tools that mean a much smaller incision, along with visual enhancements like infrared imaging that provide valuable information than only their eyes might not. The da Vinci Surgical System consists of three components – the Vision System that includes the endoscope, the cameras and other equipment that produces a 3D image of the operating area; the Patient Side cart with the robotic arms and the unique EndoWrist technology which mimics the movements of the human hand and wrist; and finally the Surgeon Console which allows the surgeon to visualise the operating area and manipulate the robot’s surgical instruments. The robotic arms hold the endoscope and the interchangeable surgical instruments. The surgeon uses hand movements and foot pedals to control the camera, adjust focus and reposition the robotic arms. The camera on the da Vinci Surgical System has a three dimensional lens system, which also allows the operating area to be magnified 10 to 15 times improving visibility for the surgeon and allowing small precise techniques. During a da Vinci robotic-assisted surgical procedure, the surgeon sits at a console while viewing a high-definition, 3D image of the patient’s target anatomy. The surgeon’s hand, wrist and finger movements made at the console (outside of the surgical field) are translated into precise, real-time movement of surgical instruments attached to three or four robotic arms.

Robotic surgery is a form of minimally-invasive surgery (MIS) that is performed through small incisions, as against conventional open surgery that requires big incisions. Robotic Surgery has revolutionised surgery allowing minimally invasive techniques which benefit the surgeon and patient in multiple ways.

For patients, robotic surgery is beneficial as robotic surgery is less invasive with fewer complications like surgical site infection. Robotic surgery saves healthy tissue from damage, causes less pain with minimal blood loss. It leaves smaller, less noticeable scars. There is little to no pain as the robotic arms enter the body via tiny incisions, healing is quicker for the patient and savings on pain management are significant.

The single most important benefit to patients of robotic surgery is quick recovery with fewer days stay in the hospital. If the patient is back home on the third day post surgery, instead of say a ten-day recovery period that’s usual in conventional surgeries, a daily wage earner can get back to productive work much earlier. Quicker recovery also means reduced hospital costs.

As the incidence of tongue and mouth cancers are very high in India, Head and Neck surgery for cancer at the base of the tongue can best be undertaken using the da Vinci Surgical System, with least pain and scarring to the patient.

Surgical Robots combine the best of science, engineering and medicine. Robotic surgery allows better vision, precision and control, designed to help a surgeon deliver better patient outcomes. It gives a surgeon superior visualisation, allows meticulous dissection, precise suturing, traction and counter traction at all times. It is 100% safe as the surgeon is completely in control of the system at all times. More than 10,000 research studies and reports confirm the safety of use of the da Vinci Surgical System in various procedures.

For surgeons it promotes precision, flexibility and control giving better visual access allowing performance of smaller, delicate and complex procedures that would be impossible with traditional methods. Conventional laparoscopic instruments provide surgeons less flexibility, dexterity and range of motion. As against traditional laparoscopic surgery where the surgeon has to perform the procedure holding rigid instruments while viewing the surgical area through an endoscopic camera projected onto a monitor, with da Vinci Surgical Systems, the surgeon sits at a Surgeon Console while viewing a high-definition, 3D image of the target anatomy. Laparoscopic instruments do not replicate hand movements and cannot perform precise movement and manipulations such as reaching behind tissues, suturing, and dissection which robotic surgery allows. The surgeon's fingers grasp the master controls with hands and wrists naturally positioned relative to the body. Three or four robotic arms, which hold an endoscope (camera) and surgical instruments, carry out the surgeon's commands. The System seamlessly translates the surgeon's hand, wrist and finger movements into precise, real-time movement of the surgical instruments positioned inside the patient’s body. The system also filters out unpredictable movements and tremors inherent in human hands. These instruments can bend and rotate far greater than both traditional lap instruments and the human wrist. Every surgical manoeuvre is under the direct control of the surgeon.

Intuitive movement of the instruments makes procedures like suturing akin to the way it is done in an open surgery. Additionally, the surgeon is able to use three instruments simultaneously, which makes this the most versatile and least time consuming form of surgery today. With four arms, it can reach organs and areas where human fingers can’t.

The 3-D image is bright and clear, with no flicker as with other laparoscopic systems. The 3-dimensional, HD view that can be magnified multi-fold, helps the surgeons achieve precision that prevents collateral damage to healthy tissue.  da Vinci systems are also equipped with a Firefly™ Fluorescence Imaging technology that enables the surgeonto switch between standard, visible light and near-infrared imaging during procedures. Used in conjunction with fluorescent dye, tissue with blood flow is highlighted in a green colour and tissue without blood flow appears gray in the surgeon's view, helping to better identify the targeted anatomy.

Robotic surgery is the method of choice and has replaced traditional open surgery in many fields, including, most notably, urology and gynaecology. Today, it's commonly used for prostatectomies, nephrectomies, hysterectomies, cardiac valve repair and other complex surgeries.

What does the future hold? Robotic surgeons open the door to the possibility of tele-medicine and long-distance operations, or providing medical treatment – including surgical intervention – remotely. With telecare, a surgeon in Bengaluru could conceivably operate on a patient in another city, state, or even a different continent. A doctor would go to a hospital, sit in a control console while a patient in a different hospital would be operated on by a robot controlled by that doctor. When robotics meets medicine, the possibilities are endless!

We have some of the best specialists from around the world, they bring years of experience and offer evidence based treatment to ensure the best care for you.

VIEW ALL
VIEW ALL
Subscribe to Robotic Surgery CMI